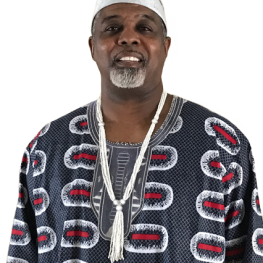 Chief Oluwo Obafemi Fayemi Epega is a world-renowned Babalawo and the founder of O.I.D.S.I. (Obafemi Institute for the Divine & Universal Study of Ifa). He was initiated as a priest of Obatala in January 2004, and received his Tefa in February 2005 from the late Oluwo Dr. Afolabi Epega at the Epega Compound in Akure, Ondo State, Nigeria. He strongly believes that the restoration and preservation of African divine sciences and traditions can restore psychological balance and personal empowerment to all people.

Born Stephen Benjamin Clark Mackey on December 30, 1957 in Houston, TX, Chief Oluwo Obafemi Fayemi Epega is the fifth child of Vivian and Fletcher Mackey, Sr., and the father of four boys: Stephen Jr., Corey, Sheldon and Jordan. Baba Femi is the author of the book entitled “Who is Sambo?”, and has also established a substantial YouTube presence for himself via Ifa-related lectures and classes over the years. He has been a diligent scholar of, as well as an active practitioner of Ifa for more than a decade. As a lecturer, teacher and healer, Baba Femi has facilitated Ifa workshops all over the world, including Mexico, Australia, Brazil, Europe and the Caribbean. He has been invited to share his knowledge and insight on countless radio shows, as well as on major university and college campuses. He has also participated as a panelist, in conjunction with prominent Black psychologists, in comprehensive discussions regarding the assessment and improvement of the mental and spiritual health of the Black community.

In addition to overseeing more than 400 ceremonies and rituals, Baba Femi has either directly facilitated, or served as the principal liaison for the initiations of more than 50 Ifa and Olorisha priests. With the blessings of Olodumare, his ancestors, and Ifa, this life has allowed him to fully embrace and experience that which his heart has chosen. He is proud to be an African American man, native Houstonian, descendant of slaves, priest of Ifa, teacher, author, mentor, son, a friend to many, a loving husband, and most importantly, an honorable father.

Warning: count(): Parameter must be an array or an object that implements Countable in /home/customer/www/obafemi.org/public_html/wp-content/themes/university/inc/widgets/latest-post-type.php on line 70

Dying & Living: The West African Concept of why God must have this